My friend Krista and I have taken a girl’s trip in June for two years in a row now.  The first year we went to Elkin, NC (in North Carolina’s wine region) and this year we decided on Savannah, GA.  When we picked Elkin, we were trying to find a centrally located place for all parties involved, but this time around we just kept an eye on Groupon deals and waited for a good “enough” deal to a place we were interested in.  We eventually found a deal for the Inn at Ellis Square in Savannah, GA and it was an easy decision.  Savannah was on both of our lists of US Cities to visit and the deal allowed for dates in June.

Krista drove down to Wilmington Thursday night and we went on to Savannah.  Friday morning we woke up bright-eyed and bushy-tailed (since we got to Savannah too late to pick up beer and stay up late in our room…) and started off to explore.  We decided to walk down to River Street and check out the shops.  We especially enjoyed the hippie shops (I inexplicably bought some essential oils I will never use, and Krista sensibly bought a dress that she actually wears) and of course, the Savannah Bee Company.

To be honest, the reason we probably liked Savannah Bee Company so much is because there were snacks.  They had more bee and honey products that I knew existed.  They had coffee samples (honey coffee is so smooth!), snack plates with crackers/cheese/honey (my favorite), straight up honey, honey combs, etc.  So much fun stuff to try!  I also ended up getting some mint flavored chapstick that has become my absolute favorite kind of chapstick, knocking off the long-reigning medicated Chapstick.

We decided to get lunch from the much acclaimed Zunzi’s sandwich shop.  Zunzi’s is a big hit on Yelp and Trip Advisor, I got the Godfather and Krista got a pita.  Both were good, but I don’t think they quite lived up to the hype?  I’m not a huge fan of sandwiches in general, so take my opinion with a grain of salt.

After that, we headed up Bull St. with Forsyth Park as our end goal.  The scenery on the way to the park was so beautiful and was everything I love about the American South.  It is SO absolutely charming I could barely stand it.  I wanted to find and wear a hoop skirt and a parasol like Scarlett O’Hara.  Between the squares, the old buildings and the spanish moss, I was in absolute heaven.  The squares in Savannah were originally created to give colonists space to perform military practices, but today they house all kinds of monuments and benches.  We stopped and took pictures in almost every single one.  This day was one of the hottest days of the year, 98 degrees with 183748% humidity, so lots of breaks were completely necessary.  Every couple of streets we would stop into a place for a beer, enjoy the A/C and then motor on with our to-go beers (YES THAT’S RIGHT.  That’s a thing here).

Forsyth Park was so beautiful, we walked around for about half an hour and started our way back to the hotel to get showered up for dinner.  Again, we weren’t in any major hurry, and we ended up making some stops along the way.  We stopped for a drink or two, then decided some coffee would be necessary.  We ended up stopping at The Collins Quarter and had mimosas and then a coffee flight (gotta balance those uppers and downers).  The coffee flight (called “Flight to Oz”) was really awesome, maybe one of my favorite things that we got all weekend!  Especially loved the one with ice cream and dark chocolate ganache.  Yesss. 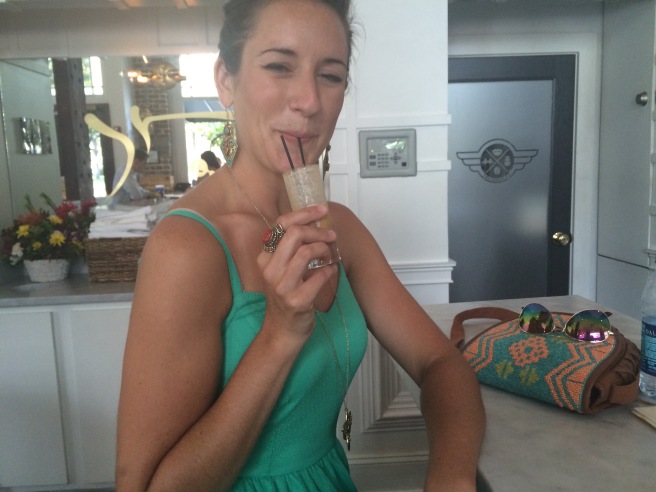 We weren’t super hungry for dinner, so we decided to go Moon River Brewing Company nearish to our hotel for some appetizers and beers.  Our favorite beers were Yoga Pants (what an excellent beer name, yes?) and Wild Wacky Wit (always a fan of wheat ales).  Food wise, we enjoyed stuffed mushrooms (so good), the leak and goat cheese cake, and the garlic fries.  Definitely recommend!

After Moon River, we decided to head down to the river front to hit up Wet Willie’s, which is a really awesome bar that serves about a million and one different kinds of slushy drinks.  This place was pretty packed inside, so we took our drinks back out and hung out on some of the benches around the bar outside. 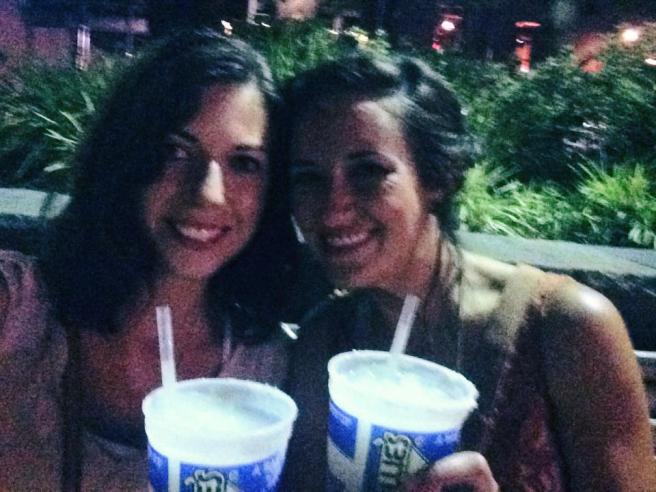 Our hotel was right next to a Five Guys (we could literally see it from our window)….so of course we hit that up on our way home and they screwed up half of our order.  We were kind of irritated but also kind of hungry and buzzed and whatever about it.

The next morning, we headed to one of Savannah’s more popular coffee shops, Savannah Coffee Roasters.  This place was really cool and they had a lot of legit food options.  We were kind of thinking we would just get coffee and maybe food from somewhere else, but when we saw the menu we decided to stick around.  The croissants looked amazing but they ran out RIGHT before our turn in line.  Oh well.  I ended up getting a yogurt/fruit/granola bowl and Krista got a French sausage roll (TWSS). 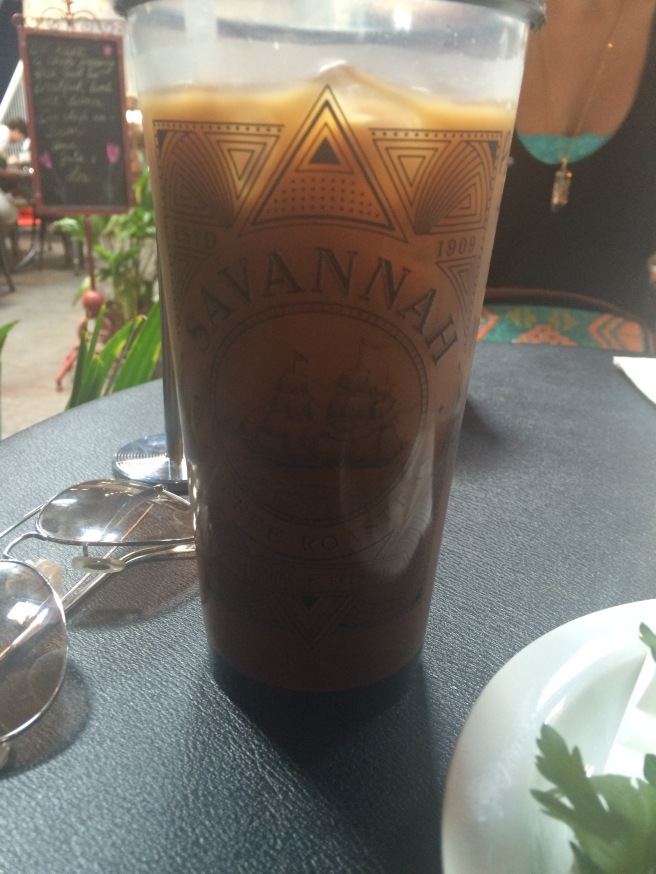 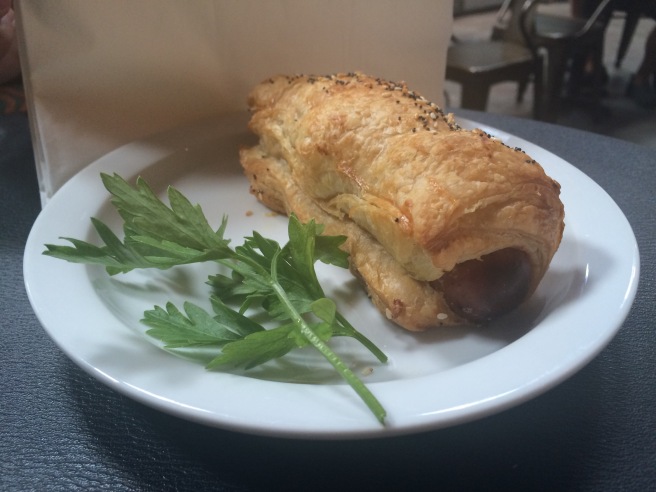 We had a few things on our potential agenda for the day and decided to just start walking and see what we could get to.  Our list included seeing The Cathedral of St. John the Baptist, Colonial Park Cemetary, Green-Meldrim House, finding the Forrest Gump bench and possibly eating at the Lady and Sons.

First up, the Cathedral of St. John the Baptist:

Roman Catholics were prohibited in colonial Savannah, the church was formed after the American Revolution and this church was built in 1873.

Marshall House, one of the oldest hotels in Savannah.  The hotel was built in 1851 and housed Union troops during the Civil War.

We also found out during our walking around that the bench from Forrest Gump was not an actual bench and was built (and subsequently removed) from Chippewa Square.  We tried to take a picture in the same spot (you can kind of tell the white-columned building in the background?), but still not QUITE the picture perfect moment we were envisioning.  Oh well! 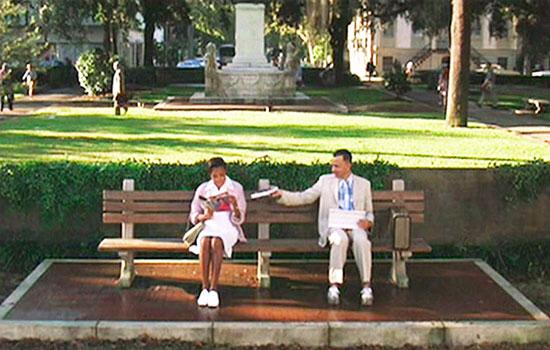 After the bench we walked to the Lady and Sons, only to find a 2 hour wait at 2 pm (?!).  I suppose that should be expected for such an “famous” restaurant.  We decided it wasn’t worth it and found Tequila’s Town instead.  You can never go wrong with mexican food and more margaritas.  Never.

After lunch we were kind of pooped but decided to motor on to the Colonial Park Cemetery.  The cemetery was a fairly long walk from where we were, and the heat really got to us by the time we arrived.  We walked around a little, and it was really neat to see the old graves but we were kind of “done” at this point and didn’t stay long.  We decided to forgo the rest of our list and relax and get ready for the night ahead.

We ended up at B. Matthews Eatery for dinner before our fun activity for the evening (spoiler alert: HAUNTED PUB CRAWL).  We ended up with one of the best cheese plates of my life, the seared House-made gnocchi, and the brown rice penne.  All were delicious and gave us some much needed sustenance for the evening ahead.

We walked over to Six Pence Pub to grab a few drinks and wait for our tour to start.  We had talked about doing some sort of ghost walk or tour in Savannah, and in searching around we were pretty excited to one with alcohol involved.  This particular tour was the highest rated one on Trip Advisor and ran us $23.  That doesn’t include drinks for the evening.  At each pub, we would grab drinks and then head outside and wait for everyone.  Once everyone had drinks, we would convene and the guide would give us some history of the bar and tell us a related ghost story.  It was so fun!  The stories (and the crowd participation) got rowdier as the night and drinks went on.  I would definitely recommend this tour!

After the tour dispersed, we hit up a couple more bars and eventually headed back.  We had to walk by Five Guys again to get home, soo…in we went.  And they messed up our order AGAIN.  This time Krista ordered a bacon cheeseburger, and got a bun full of vegetables only.  No meat in sight.  In our post-pub crawl haze, we wrote an angry email to them, which we found out the next day actually went to the Five Guys Android app developers, whoops.  Needless to say, we didn’t get a response.

And that concluded our trip to Savannah!  The next morning we got up and hit the road (after a MINOR car difficulty that involved me leaving a light on and a dead battery and waiting for AAA and trying to figure out how to get them into the parking garage….).

Have you ever been to Savannah?  Is there anything better than walking around outside with alcoholic beverages?  What is your favorite way to eat honey?  Does anyone want my essential oils…?

This post is part of the Travel Tuesday link-up!  Thanks for hosting, Courtney and Lauren! 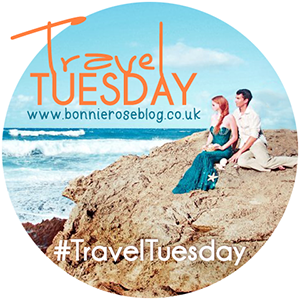