This is my final post in the Italy series!  See previous posts here:

I’m not even sure how the idea of our Italy trip really started.  I knew that I wanted to travel around more to Europe, but Nick wasn’t exactly on board.  To him, vacations meant sitting on a beach with a drink in hand.  This is a perfectly valid approach to vacations, and I can certainly understand wanting to relax during our very limited time off.  But I had the TRAVEL FEVER and basically would not shut up about going to Europe until he finally acquiesced that we could talk about it and I should find a couple of examples of what I was looking for to start comparing dates and pricing.

I knew that I didn’t want something that was overly scheduled and that involved a lot of coordinated group tours and bussing around.  (Our short-lived group time in Venice with the gondola ride and walking tour confirmed this for me).  But I also wasn’t quite comfortable enough to plan everything on my own.

I started looking at various travel tour companies and eventually found Go-Today.  I especially liked their flexibility, you are able to fully customize a trip, they have five or so levels of accommodations, and they have endless combinations of destinations.  They allow you add-on or decline a lot of options, including airport transfers and tours (we declined just about everything, because #cheap).  They usually  have a few different coupon codes available as well, which was very appreciated.

I narrowed in on two packages that I liked, London, Paris & Rome and Rome, Florence & Venice.  We hemmed and hawed and did some more research and ultimately determined that the Rome, Paris, London tour was out.  A friend that has done a lot of traveling recommended against seeing multiple countries in one trip due to the border and customs issues.  We also realized that the extra travel cuts in to a lot of your time and we wanted to really maximize our days.  In further reading, we started to get concerned about going to Venice during this time of year.  November can be a rainy time in Italy, and Venice is susceptible to flooding (see here).  We didn’t want to have to deal with that headache, especially for our first European vacation.  It’s one of those things that probably WOULDN’T happen.  But man, if it did, that would be really terrible.  After we nixed that one, I kind of felt like we were back at square one, but I realized that I totally wanted to do Italy the most.  I was stuck on it.  I had the Italian fever.

Nick started to do a little of his own research and found this Italian package on sale on Go-today, Rome, Florence & Tuscan Villa.  Wait, like Tuscany?  As in the delicious food mecca?  Like the movie Under the Tuscan sun?? I could do that?  I LOVED this option and was 100% on board.  Nick probably regretted bringing it up to me, because he wasn’t totally convinced (and I was basically ready to hit the “Buy Now” button).  He was concerned we might be bored there or it might be a “waste” since it’s a tad slower than a major city and more spread out (and would involve him driving around).  So what did we do?  More research.  We looked at several “Things to do in Tuscany” lists and tried to find lists for fall and November specifically.  We found that November was the month of olive harvesting and wild boar.  I found some tours where you could visit an olive grove and participate in picking and pressing into olive oil!  This sounded great to me.  This, plus the wineries and historic towns were enough for us to deem it with “enough” to do.  And Nick is an awesome sport and decided he would be ok with the driving.

In preparation of our trip I bought an Italian road map (didn’t even end up using this with the GPS) and 3 outlet adapters from Amazon.  Note that Italy uses an “L” type (three prongs) plug, which is different than a standard European outlet type.  In retrospect, I just would have bought a multi-adapter.  At the time we thought Italy would be our one big hurrah to Europe, but we’ve since gone to Greece and are planning a Germany trip as well.  We ended up buying the multi-adapter when we went to Greece and will probably never use our L adapters again.  I ended up bringing an old hair dryer with me (in case the voltage difference caused damage) and decided not to bring a straightener (I didn’t have one that I was ok with ruining).  I also used the adapter for my phone and camera chargers.

We also decided not to get a data package through our phone service while in Italy, so I did a lot of research on apps to use while there that had downloadable, offline content.  I ended up downloading (and would recommend) the following:

Triposo – I loved Triposo for the information on sights and restaurants.  It has very detailed guides and recommendations.  The restaurant search feature is pretty great, you can search by distance from you, or by certain features (lunch specials, outdoor seating, etc.).  You can also drill down to specific areas (Siena, for example) or keep it to a more general region (Tuscany) for your searches.  Triposo covers locations all over the world, and I would recommend it for any trip. In fact, we used it for our trip to Greece this past September and we will definitely be using it for Germany next May!

Maps.me – This was our go-to app for maps.  It’s perfect for walking around and finding specific addresses.  It also gives good walking directions.  It also has some features to find restaurants and sights, but I found that they didn’t work as great in this app as others (like Triposo).  You do need to download the content in advance so that you can access it offline, without using data.  I downloaded the entire Italy package before we went, it did take up a lot of space on my phone, but it was easy to delete once I got home.

Rick Steves Audio Europe – I think I mentioned this app about 100x in my recaps, but this app is really invaluable in my opinion.  It’s the MVP of travel apps.  The walking tours were great, we used them for as many sites and museums as Rick had available.  I also listened to some of the Italy general topics during train rides or at night in our hotel.  It’s easy to use and find sessions and you can download them to your phone so that you can access offline.  I also personally really like Rick’s style and he frequently has local guides from the area featured as well.

Duolingo – I used this app to learn Italian phrases and basics.  I didn’t use it super consistently or follow all of the lessons but in just a few sessions I felt like I gleaned enough to be able to read signs, menus, etc. with reasonable ease.  It’s very easy to use and the lessons were even kind of fun (though I did not appreciate Nick overhearing and teasing me through some of the games where you have to speak into the mic, haha).

I got really into looking at different packing lists on Pinterest ( I found this one especially helpful) and looking up typical November weather for Italy.  Italy tends to be mildly temperate (similar to the mid-Southern Atlantic region of the US) and can be rainy.  I ended up bringing the following for our 9-day trip:

If I had been a blogger when we went on this trip, I would have taken a picture of my suitcase or outfits and inserted that here.  But I didn’t, so this post is infinitely less Pinterest-worthy.

This was my longest plane ride to date, and my first non-military international flight, so I didn’t really know what to expect.  I was so easily impressed with all of the “perks” you get on international, like a meal (how long has it been since you’ve had an actual meal on a flight!), free alcohol, and personal TVs with unlimited movies and shows.  I had a few glasses of wine to try to get myself to sleep easier, but ended up sleeping only 2-3 hours total.  I was too excited!  I slept much more on the way home.

I brought the following items to keep myself entertained and comfortable:

What I think we did right

Well that pretty well wraps up our Italy trip!  Overall we had an amazing time and I hope that the posts were informative and fun to read! 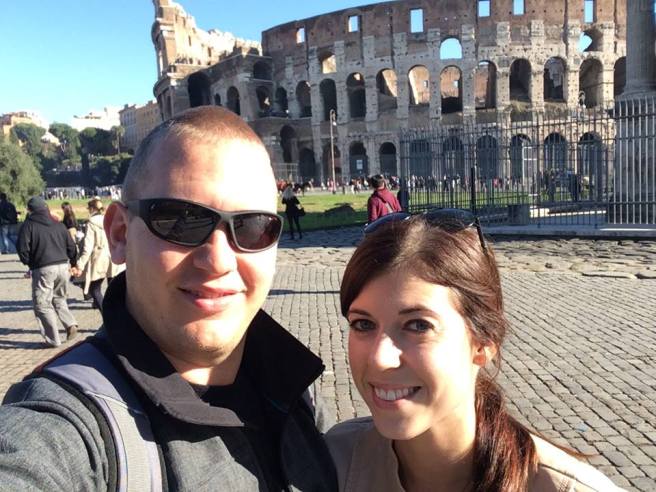 Next up: NYC girls weekend recap!

This post is part of the Travel Tuesday link-up!  Thanks for hosting, Courtney and Lauren!