Aah Venice.  Nick and I were so thrilled to have the opportunity to visit Venice.  We were only able to swing a day trip for this visit since we squeezed it in last minute.  I don’t think you are really able to fully appreciate a place in one day, but sometimes that’s how the cookie crumbles when you have limited vacation and budget.  It would certainly be ideal to have explored at our leisure, but that was just not our reality for this trip.

Side note: It’s my favorite thing when I’m reading a message board and someone asks for recommendations on what to do in City XYZ in one day.  Inevitably someone chimes in with the super (un)helpful input of “Oh, well you can’t POSSIBLY begin to experience XYZ in one day, more time is needed.”  Even when the original poster explained at length WHY they have the one day limitation and has even expressed regret as to only having one day, acknowledging that it’s not enough to fully experience the city in question.  WHAT ARE YOU ADDING TO THE THREAD.

We took a high-speed train from Florence to Venice, which was awesome.  Train travel is my new favorite travel.  It’s so much less painful than air travel.  No security, no showing up two hours early, more space, more comfortable, you can freely move around at any time, it’s more picturesque, etc.  I could go on.  Our train ride was uneventful, and we got to Venice mid-morning.  We booked this excursion through a package that our hotel was running a special on and as part of that we got a gondola ride and a walking tour, but these didn’t start until 3, so we had some time to explore.

Our first order of business was walking around, getting some food, and heading to the Rialto Bridge.  I spent a good portion of the train ride looking up things to do and where to eat (another great thing about trains! no turning off your phone plus free wifi) and saw a sandwich shop right across the bridge from the train station.  We stopped there first to get a snack to fuel the rest of our walk (and it’s a good thing we did….).  We also picked up a map in the train station that had several suggested routes through Venice.  There were around 8 and went through various parts, you could pick one based on what you were most interested in seeing.  We picked one that had the most architecture and churches (we knew with our limited time that museums were probably not on the menu for us.) and set off.

At first we were doing a great job of navigating through Venice.  We had a paper map and my trusty Maps.me app.  We were identifying all the streets, saw some cool churches, walked by some interesting sights.  We were KILLING it. 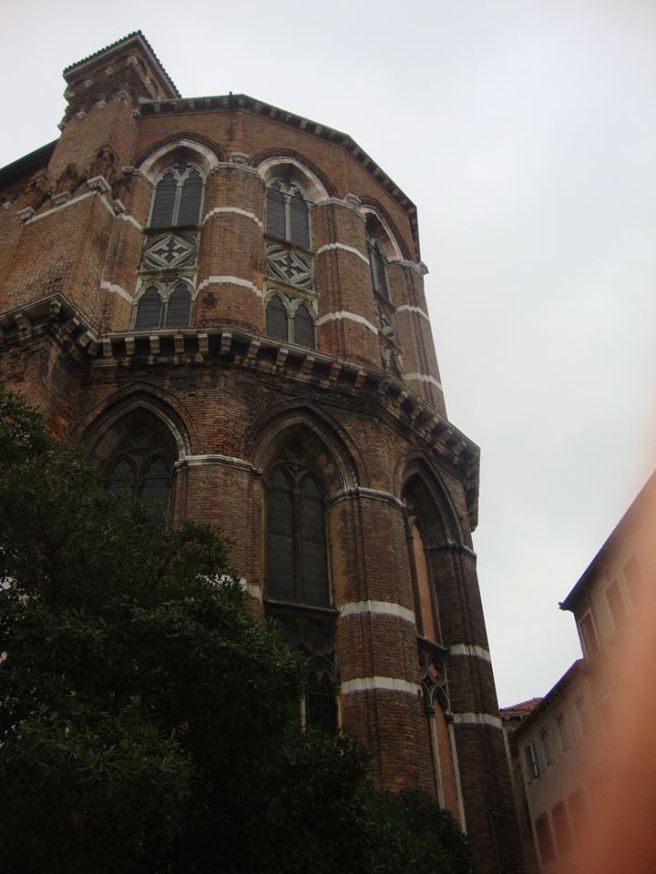 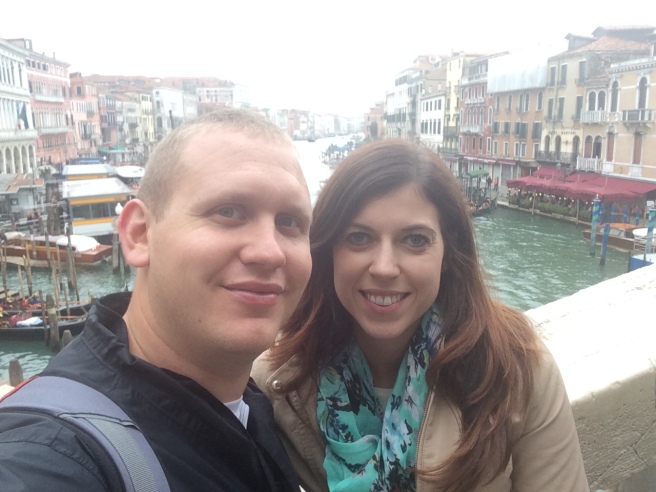 Then we made the dire mistake of attempting to find a restaurant.  During the off-season.

We couldn’t find the street that this restaurant was on to save our lives.  According to Maps.me, it was off of a medium sized Piazza, so we felt like we had accomplished something by finding this Piazza.  We tried one corner of the square, looking for the street.  Then the other.  Then the third.  Finally, we took to checking every single street off of this Piazza.  No dice.  At this point we were getting hungry for an actual meal and were frustrated at being lost.  We started getting pretty irritated at each other, but were trying to retain some sense of civility so we kept it to eye rolls and sarcastic comments at each other’s suggestions.

We left the original Piazza, where we were sure the street was locaed, to another (I’m not even sure what the logic was behind this plan).  We obviously eventually found ourselves BACK at the original Piazza.  Luck struck this time, and WE FOUND THE STREET.  So excited!  Our troubles were over!  We meandered down this street, but it looked mostly residential so we were kind of worried.  Our original triumph was slightly dampered.  After 15 or so minutes of walking (during which time we had escalated to threatening, tight-lipped whispers at each other), we found the restaurant!  And…it was closed for the season.  We were pretty irritated that we spent like 45 minutes of our limited time finding this restaurant, and didn’t even have an imminent meal to show for it.  It’s obviously our own fault for not doing a better job of searching things out beforehand, lesson learned, do your research.

We decided to continue on our path to the Rialto bridge, a quick lookup told me that it was a more populated area and we figured more restaurants would be open there.  We were so, so hangry by this point and were pretty much openly fighting.  We got to the Rialto bridge area and struck out with like, three places in a row.  Our open (and increasingly loud…) public fighting escalated and at one point I ended up stomping away from Nick and walking over to the bridge by myself.  Relationships, amirite?

He eventually found me (and was understandably angry that I was trotting off by myself in a foreign country) and we got our heads together.  Up until this point, I was still consulting Trip Advisor and several other apps to find something that was highly rated, but after we became friends again, we ditched that plan and decided to just settle with any place that had FOOD.

At this point, the God of Lost Foreigners in Venice smiled upon us, and we walked by All’Arco.  All’Arco serves “cicchetti”, which is the Venetian version of appetizers, small snacks or tapas.  We probably would have preferred something more substantial at this point, but we weren’t going to be choosy here.

They have a beautiful case of cichetti, most incorporated seafood but there were also lots of spreads, cured meats and salads.  The workers here were so nice (maybe they could sense how frazzled we were?) and helped us decipher a lot of the dishes and gave us several recommendations.  At one point, we encountered a bit of a language barrier on what type of seafood was on one of the snacks.  I looked down and then back up and the cook was holding a giant, live, creepy crawly (looked like a large shrimp) to show us!  We ended up with about eight different types and ordered some wine to decompress a little.

With happy stomachs and happy spouses, we soldiered on to Piazza San Marco (Saint Mark’s Square).  This view was really awesome and I loved the architecture of St. Mark’s Basilica.  Venice really looked so different from Rome and Florence, you can feel the influences of more eastern places.  I feel like the architecture was so much more detailed and intricate.

We didn’t go into the church since we were due soon at the rendezvous point for our gondola ride.  Our gondola ride actually took a while to get going, because we were part of a group, we had to wait for everyone to get to the meet up point and then the logistics of splitting into groups that made sense and getting onto the gondolas took a while.  If I were to do it again, I would skip the group ride and just find one of the many gondolas that were soliciting us for rides all day.  The experience was awesome though!  It was fairly cold since it was November on the water, but still so exciting.  I was so thrilled with everything that we did and saw in Venice, I think because I had resigned myself that we weren’t going to experience any of it during this trip since it wasn’t on our original itinerary.  I felt really happy and lucky to be there and I’m so glad Nick thought of the idea! 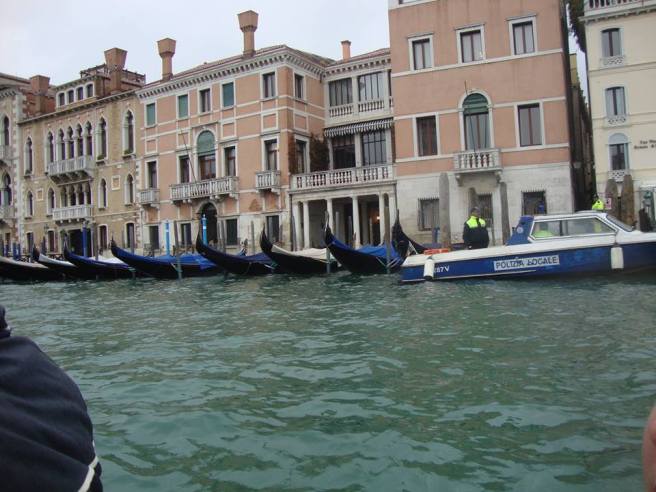 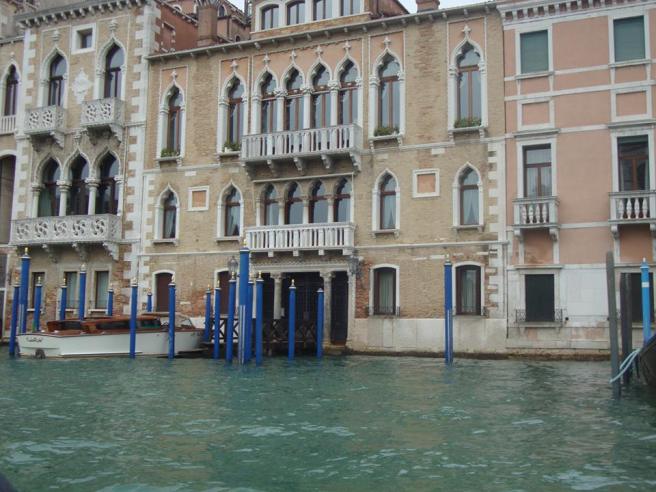 After we disembarked our gondolas, we were greeted by our walking tour guide.  This guy was great, he had a lot of personality and was very knowledgeable.  He asked a little about our interests and tailored his commentary to that.  He spent almost all of the breaks (where we were actually walking) catching up with people and giving more details.  This was also our first tour where we used the handheld audio device.  It was great to be able to hear everything, but it did crackle in and out if you wandered off too far (like I tend to do).

After the walking tour, we had an hour and a half to get back to train station.  We decided to grab some pasta from Dal Moro’s.  Dal Moro’s is a fresh pasta take-out restaurant in Venice.  They have several different pasta types and a ton of different sauces.  Nick got the Bolognese and I got the Mamma Rosa sauce.  Nick didn’t love his, but the Mamma Rosa sauce was a hit with us both.  We ate our pasta while walking back to the train station.  On our walk back, a lot more shops were open than earlier in the day.  We stopped in a few glass shops and bought really nice wine stoppers, shot glass and a little gondola figurine!  The train ride back was a little sad knowing that our awesome trip was really over, but I spent most of it looking at all of the pics on my phone and being really grateful for the experiences and fun that we had.

Our day in Venice was really awesome (if a little hectic…), and it definitely solidified that I need to go back for a few days on a future trip (so relax, message board person).  I’m really glad we did the excursion, and would recommend it if someone finds themselves in a similar situation.  I don’t think I would recommend a day trip if you feel like you are going to miss something you really want to do in the city you are in, because you don’t really soak up enough of the excursion city and miss out on the city that you’ve already paid to visit.  But if you find yourself with some extra time, it’s a great way to scope out a city for a future visit 🙂