Going into our Italy vacation, we weren’t 100% sure if we would end up doing the Pompeii trip.  We didn’t want to cut our time in Rome short, you could spend a whole week in Rome and still not see EVERYTHING.  BUT this is something we were really interested in seeing and it came really highly recommended from friends.  Funnily enough, seeing the Coloseum the day before really tipped us in the direction of making the excursion.  We realized that there is something really special about seeing the ruins up close and that is where we wanted to focus our time/attention.  When you have limited time and unlimited things to do/see, it’s always a good idea to focus your energies on the kinds of activities that you enjoy.

There are a LOT of excursion options available from Rome to Pompeii including trains, shuttle buses, etc.  We chose to do it on our own via train, mostly because it was the cheapest, but we also wanted to get there right when it opened and operate on our own schedule.  We had also heard from friends that it was straightforward to get there. Our goal was to be back in Rome (Trastvere specifically) in time for dinner.

Pompeii is located approx 35km (21 miles) from Naples.  In order to get there via train, you take a train from Rome (we left from Termini station) to Naples.  In Naples, you have to switch stations.  You will need to go underground to find the Circumvesuviana (commuter train).  It’s a bit of a walk and sort of hard to find, so allow yourself some time here.  You aren’t able to reserve Circumvesuviana tickets in advance, and they come every 30 minutes.  You are looking for the train headed to “Sorrento” as the final destination, and you will get off at the “Pompei-Villa dei Misteri” stop.  The entrance to Pompeii is right across from the final train station and super easy to find.

You have a couple of different options for tours:

We left Rome at roughly 8 am for the ~2 hour ride to Naples and got to Pompeii at 11. We planned to spend about 4 hours there.  You could definitely do more, but we felt like that would give us a solid overview without feeling rushed. 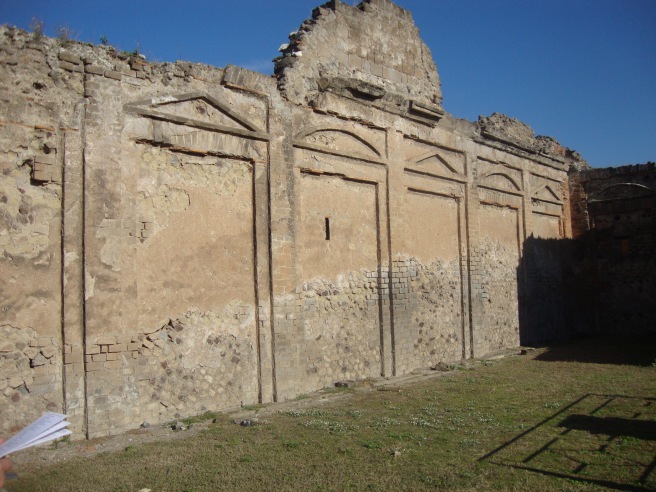 Overall it was a great excursion, but there are two things I would do differently:

1. The audio guide mentioned above

2. Bring plenty of snacks and water. There aren’t a lot of food options close by and we ended up eating the overpriced cafe food. I would have much preferred to buy some meats/cheeses or something the night before and had them with us.

Doing it on our own via train cost about 90 euros per person, round trip.  The cheapest excursions I could find from Rome were around ~150 euros (there is a large range), though those typically include a guided tour, which we didn’t do.
After our day at Pompeii, we headed back to Rome around 3:30 pm.

We walked back to our hotel and got ready for dinner.  We were really tired but excited to head back to Trastvere (BURRATA DREAMS).  I cannot for the life of me remember the name of the restaurant where we ended up, but here are some pics of our food anyway!  Nick got carbonara and I had a lemon/parmesan pasta dish that was really good.  I also had my first taste of tiramisu.  Tiramisu isn’t a traditional Roman food. It technically comes from Treviso, Italy (closer to Venice), but it’s one of my absolute favorite desserts and I couldn’t hold back.  No ragrets!

We partially walked, and then, realizing how dead our feet were, took a cab the rest of the way to our hotel and tried to get to bed early, because the next day we had an early train to Florence and were embarking on the major adventure of ~driving a car!~. If you’ve ever seen Italian drivers you know how terrifying this was.

One thought on “Italy Day 3: Pompeii”